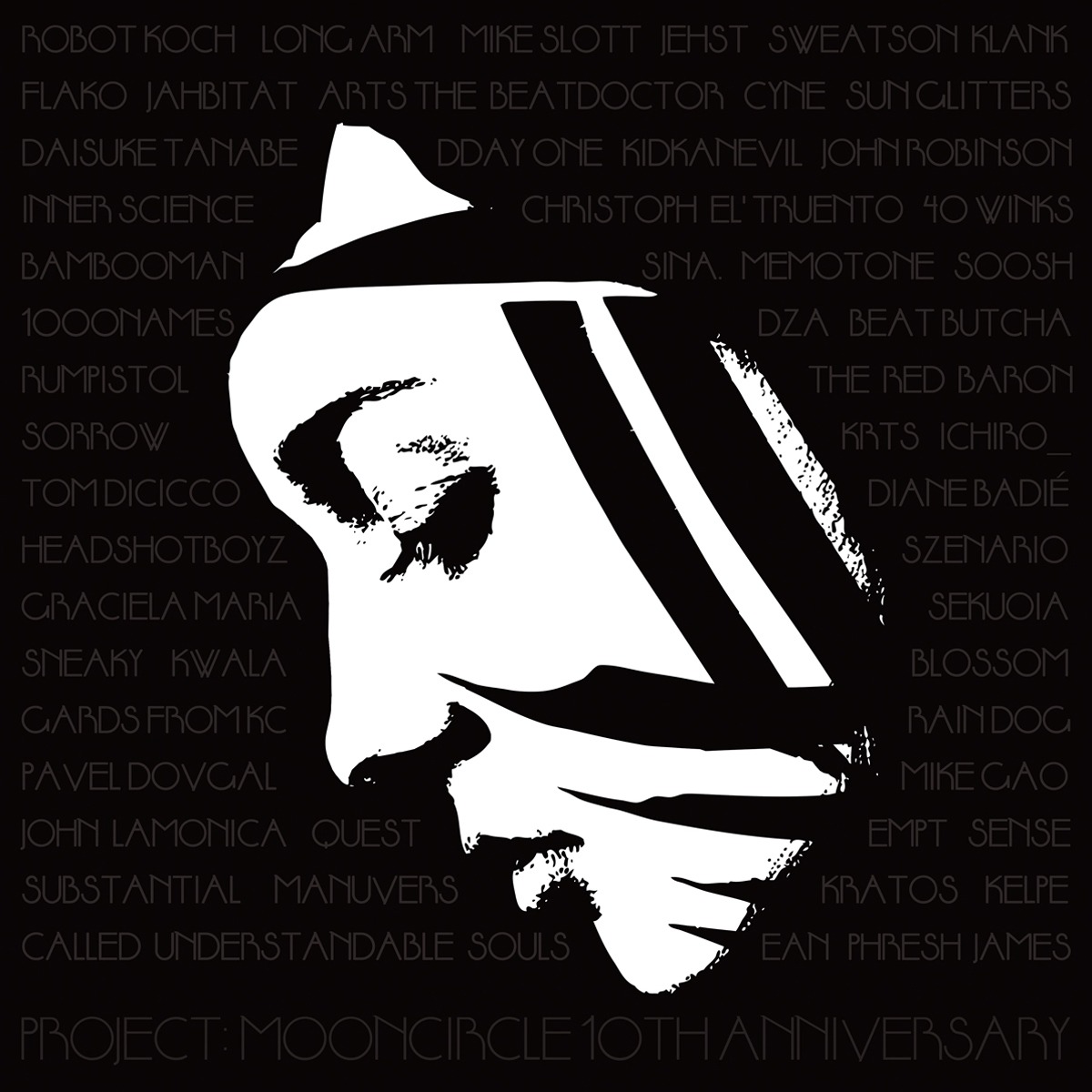 Project: Mooncircle, as the name reveals, has been on a journey to the moon since day one, exploring the frontiers of music and art, always looking for new discoveries and giving a different perspective to look at the earth. In it’s 10 year history the label has published roughly 100 releases by equally as many artists from all corners of this globe and, therefore, the selection of sounds on this compilation represents the development of the label from the past, present and going into the future.

Some of the artists featured on this compilation have been a part of the label from its very beginning, like CYNE, Manuvers and Jahbitat, whose song will be the last one he produced and published under this moniker, while others, like Robot Koch, fLako and Long Arm, are outstanding examples of its growing popularity and success. Furthermore, the box also features an exceptional selection of close musical friends and inspirational artists like Jehst, Dday One, Kwala and Ichiro_, just to name a few.

The limited box includes 2 white & 2 black vinyl LP’s with 32 tracks, 13 additional digital bonus tracks, a T-shirt (only at hhv.de) and a poster (with digital download code) all in a specially designed box that features a special light-reflecting varnish, which makes this truly a collectors and music lovers item.

Berlin-based label Project: Mooncircle and it’s two sublabels Project Squared and Finest Ego is an official label from hhv.de. It was founded in 2002 and is specializing in the conjunction between electronic and organic music.
The label, at first envisaged as a compilation project only, soon released the first instrumental and vocal solo releases by such artists as The Q4, CYNE, Mr Cooper, Robot Koch, fLako, 40 Winks, John Robinson & MF Doom, DZA, Krts, Sina., Graciela Maria, Manuvers, Lambent, Lewis Parker, Non of Shadowhuntaz, Strand, Ta-Ku, Mika Gao, Onra, Obba Supa, Asusu, Furesshu, AnD. Kowton or Glen Porter. The work of illustrators and graphic designers such as Bioniq, Dan May, Iain McArthur, Ima One, LNY, Gordon, 44 Flavours, La Mano Fria, and The Binh create images that accompany the acoustic spaces.

Project: Mooncircle with its various producers & vocalist shall be an interesting experience for anyone looking for the extraordinary.

Thank god for labels like this whose quality control makes record digging in the ever growing but increasingly mediocre world of beats a whole lot easier. Happy birthday boys, I’m looking forward to the next 100 already!!

Damn! This sounds like classic compilation or compilation of classic tracks. Whichever way, the quality remains very high all the way through and originality is paramount too. Love this.

Distant Recall is definitely the jam out of these. Going into my dj box!

EPIC release!! Every track is amazing, perfect celebration of a classic label.

Good shizzle, I shall promptly download to my laptop.

Went round this at least three times today, great stuff. Will definitely jump on the box set when it comes. Cheers for the heads up.

This is QUALITY yoooooooooo !!!! Beautiful tunes, hard to pick favourites!

Thanks for this..i’m a big fan of the label and this sampler represents but just touches on the groundbreaking music they release. Everything they do interests me and is up my strasse.

Loving the Om Unit and Robot Koch tracks. PMC have always been a great label, congratulations on the anniversary!

Lovin Niad, Serve and Distant Recall. This album is superb, the production is immense.

Lovely space sounds, much appreciated. Highlight track for me is Flako ‘Jekyll & Pride’.